A few years ago Jay wanted someone proficient in python to rewrite usm. No one was able to accept the proposition. Do you have skills in java?
Prendre son temps, profiter de celui qui passe.
Top

And so my needs for apps in Linux are now fulfilled.

Sounds interesting. since it's hosted on KDE I presume trying to run it on XFCE would need insane amount of dependencies?
Cheers!
Yours Rava
Top

My issue is: even when the program is a larger one I want to get running, often the dependencies are its size multiplied by whatnot. O__o

In my book that goes against the KISS principal.

And I believe KISS is one of the ideas Porteus tries to follow, no?
Cheers!
Yours Rava
Top

Porteus is KISS and KISS is porteus. Though some find that porteus is for geek only.

Honestly is not easy make things KISS.
But here is a bunch of people developing to make possible to have an OS working correctly out of the box with the essential things, everything else are complements and not always keep it simple is the easier way.

In fact, my efforts since the first post in this thread was to abide to K.I.S.S. principle.

All I was trying is to fill the gap of applications I M.I.S.S. (mostly I seem to sympathize) when I use Porteus (and Linux). I've tried to do it really simple, reducing it to just a matter of point and click. I have provided some tips and tricks and explored/exposed the ways you can benefit of AppImages. Had I have the knowledge, and the time, I would tried to convert them to .xzm bundles stripping out the unneeded stuff, but I do accept my lack of skills.

There must be something I'm missing here. As it was first stated (I quote myself): "[*] WARNING: I seriously advise you against the indiscriminate use of AppImages".

The name of the thread reads Popular Appimages, and it was published in a Howto section, so I don't get it when this is drifting into arguing about size or the number of qt/kde libraries needed for an app to run.

While I preferably use XFCE, should I use KDE, I would be pleased to have access to a native GTK app which has no replacement without the need to install all the related packages/dependencies. And I think this was already discussed too regarding to bloated nature of Appimages.

I hope you understand that the reason for this thread is to contribute something to a community that has taught me a lot. Nothing posted in this thread by me has been posted on another forum.

Next stop: Convert these AppImages to bundles/modules. Anyone for the task?

Probably me.
Back some time, I managed (now its not the most recent version) to create the smallest GIMP version for 5.x Porteus that ever existed for that very GIMP version.
I did strip away all non-essential dependencies - or more precisely not added them - ignoring GIMP complaints at startup: when all worked and you could open and save all formats, it was good enough for me.

At least there was not a single complaint that my module missing libXYZwhatever meant that some obscure rarely performed task failed.
And if such complain would have emerged, I would not have expanded the main minimal module, but only added an additional module giving the user libXYZwhatever to be activated when this one task should be done.

One of the non conventional things I did - and I learned that from some other Porteus forum user, I just do not recall who that was - was reducing the full-HD-sized splash loading screen image by a much smaller (as in dimension and size) one. It was a PNG and it was like 3 or more MB just for the splash screen.

A second thing that helps with all programs who have a complex GUI (e.g. GIMP or Blender) is removing all additional languages. I gave all the languages as extra module telling the user how to extract the one (or maybe two) languages (s)he actually needs and how to create an individual module with stripped languages but added maybe French and German only. Still the user can be a lazy bugger (Brit.) [sl.] and not create his own GIMP or whatever-program version and instead load the extra-module with all the unneeded languages.

That makes a huge difference. The more complex the GUI, the larger gets the module.

Due to lack of time I was not able to perform the same kind of magic with the most recent GIMP.

But if you are up to for the task I can at least go into more details of how to strip modules. I think I even made a thread explaining the stripping additional languages part on here. (It received not much replies as I recall)

So, wanna have me as your senpai teaching you how to create minimal-sized xzm modules?

If so, then we should move to another more appropriate thread, maybe revive mine about stripping the languages, unless that thread was in the VIP area, then we have to start a new one.
Cheers!
Yours Rava
Top

And so my needs for apps in Linux are now fulfilled.

This Speech Recognition from audio/video file using PocketSphinx is such a great feature I'd never seen in any other subtitle editors, at least the ones I've tried and I've done a few ones. So thanks for sharing this one!

Tolkem wrote: ↑
02 Dec 2020, 17:54
This Speech Recognition from audio/video file using PocketSphinx is such a great feature I'd never seen in any other subtitle editors

Glad it serves you well.

Tolkem wrote: ↑
02 Dec 2020, 17:54
This Speech Recognition from audio/video file using PocketSphinx is such a great feature I'd never seen in any other subtitle editors,

Is that PocketSphinx Speech Recognition available for use with speech recognition of vocal recordings for the use of creating office documents, too?
Cause I am in dire need of one that is free and open source software and is of good quality, speech recognition-wise, and is also able to learn when unknown words are used.
Cheers!
Yours Rava
Top

Tolkem wrote: ↑
02 Dec 2020, 17:54
This Speech Recognition from audio/video file using PocketSphinx is such a great feature I'd never seen in any other subtitle editors

Glad it serves you well.

Yeah well, it doesn't work for me here. I get

Does it work for you?
Top

Neither for me. I'm just using for OCR, but this would be a great addition.

I presume it's lacking some other qt lib or something. Will have a look when possible.

Thanks for the feedback.

Neither for me. I'm just using for OCR, but this would be a great addition.

I presume it's lacking some other qt lib or something. Will have a look when possible.

Thanks for the feedback.

Recognition speech's working! With the help from someone at the invent.kde's subtitle composer repo I managed to get it working. Here's how to:
1. Create a folder somewhere in your pc named "cmu-models" or whatever you like.
2. Download these files en-70k-0.2-pruned.lm.gz and cmusphinx-en-us-5.2.tar.gz from here https://sourceforge.net/projects/cmusph ... 20English/ and en_us_nostress.tar.gz from here https://sourceforge.net/projects/cmusph ... odels/fst/ and extract them to "cmu-models" folder you created.
3. Launch Subtitle Composer and set up the cmusphinx module similar to this: 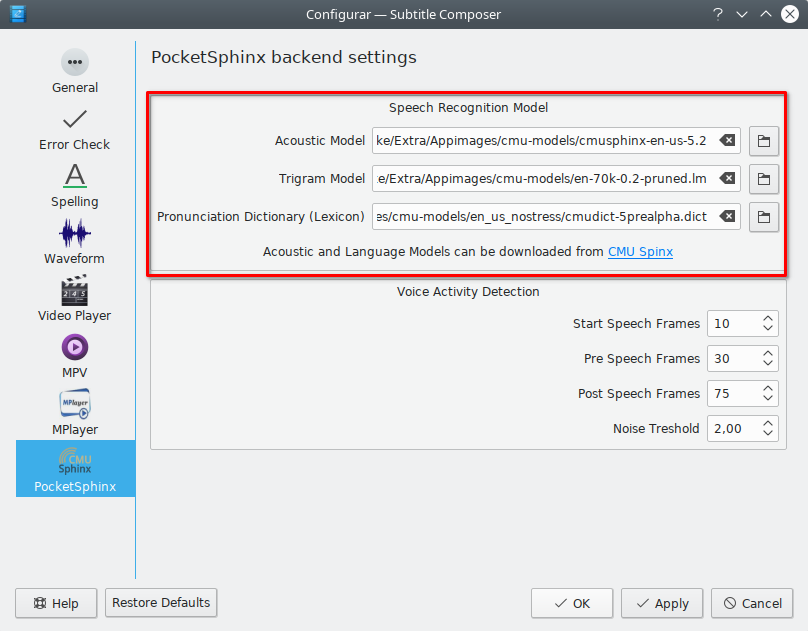 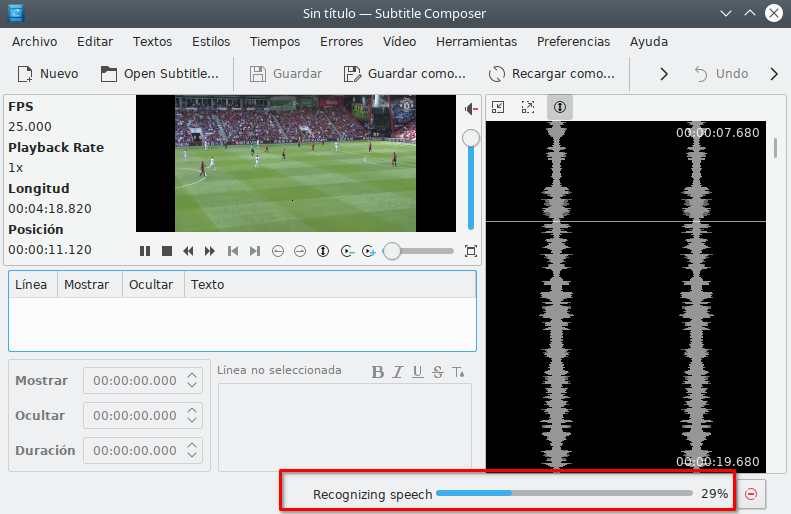 Mind you, it does seem to be quite resource intensive, in fact, I didn't fully test it but it seems to work, well at least no errors this time.

If your machine has plenty of resources you might have a better experience, here with only 2GB RAM and a 1300Mhz dual-core CPU I might have to work around it to use it, like crop the video into smaller pieces like 30s maybe and see how that goes. I first tried with a video 20mins long and have to switch to a tty and kill the app from there lol then I tried with the one in the screenshot which is only 4mins and was still taking quite long to process it, so I just stopped it. Try and let me know how it went for you. Also, that person told me this: "Bigger language models are slower than smaller ones. Usually they are all pretty slow, and not very accurate when there is background noise in video file. Note that you need higher quality 16khz models, 8khz are not supported."